My camera and I have been reunited.

I went to a PACS ceremony in Champagne-Ardennes back in September, with camera in hand.  I took pictures all night long, as I normally do.  Then about two weeks later, a sudden sick feeling came to my stomach..."Where the heck is my camera?!"  I tore my apartment apart.  I asked Fab to tear his apartment apart.  No trace.  E-mails were sent, but no one seemed to know where my little reliable Canon camera went.  I missed out on a lot of events (Prague, Thanksgiving, traveling in France, eating at Chateaubriand) and felt naked most of the time...paralyzed even.  But then, one night, Fab calls.  He found my camera in his suit pocket (the one he wore to the wedding).  Praise the powers that be!  So now my camera and I are working together again, and it feels so good.

I followed Fab to Vendée for Christmas festivities with his family.  I have been to Vendée several times now, and it is an absolutely lovely region, and a rather unknown one to us Americans at that.

Vendée is in western France, very close to Bretagne.  It is lucky enough to have kilometers of sandy beaches on the Atlantic shore, as well as some gorgeous islands, such as Île d'Yeu.  People from Vendée, especially those from La Roche-sur-Yon (les Yonnais), have a deep historical connection to their region because the area was subject to massacres during the French Revolution due to their resistance to the newly formed government.  La Roche-sur-Yon (the capital of the department) strongly identifies with Napoléon because he established the town in order to reconcile with the region after the terrible losses they suffered under the Revolutionary government.  There are many cool places to visit, such as the Haras (one of the largest horse stables in France), Le Logis de la Chabotterie (castle, but also one of the best restaurants I have ever eaten in), and great beaches like les Sables d'Olonne and La Tranche-sur-Mer.  There are wine producers, the best being (according to my mother-in-law) is Château Marie du Fou.  The region is famous for their oysters, which are in season from September to December.  They also are known for la gâche (a special brioche that is quite dense and moist), jambon-mogettes (ham and white beans), le préfou (garlic bread), and poultry from Challans is some of the best in the country. 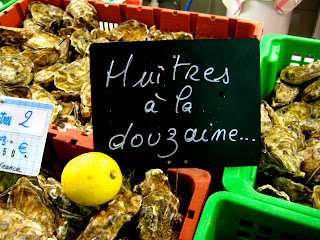 Oysters de Vendée
I was lucky enough to have two huge Christmas dinners (my waistline, however, is another story).  The first one consisted of a traditional chapon (milk fed rooster) stuffed with chestnuts, mushrooms, and sweetbreads.  I normally only go for my mom's dried fruit and savory stuffing, but I could not get enough of this French concoction.  I swear there had to be some sort of addictive substance in it!  We had the usual foie gras for the first dish (this is a Christmas tradition in France) with an onion chutney, as well as raw oysters with bread, butter, and lemon (a Vendéen tradition).  It culminated with cheeses from Beillevaire, which is known as one of the best cheese producers in the region.  And then came the chocolate caramel bûche de Noël from Gelencser, which has several establishments throughout Vendée.  I was so full, I couldn't even move afterwards. 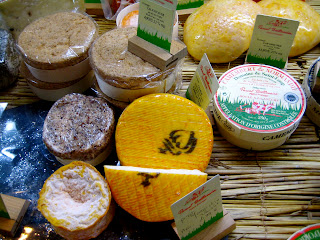 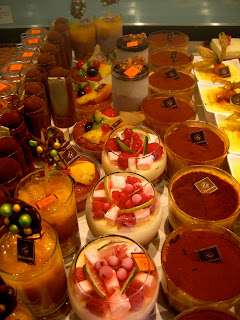 Verrines de Gelenscer
The following day's dinner was again foie gras, but this time with a fig jam.  The main course consisted of deer filets, wine poached pears, and gratin dauphinoise (potatoes, cream, cheese).  We then had cheeses from Beillevaire again, followed by a 3 chocolate bûche de Noël from Le Napoléon (another reputable bakery/chocolatier).


To work off our newly acquired food babies, we took a trip to the Sables d'Olonne area for a mid-afternoon walk on the beach.  We were there just at sunset, so we had a gorgeous setting for our winter beach promenade.  The area is under construction still following the Xynthia storm that rolled through in 2010.  The storm completely changed the landscape of many beaches due to winds and high tides, and caused some pretty massive damage to homes and beach structures.  It became the talk of France, and many people came from all over the region just to survey the damages for several months following the storm. 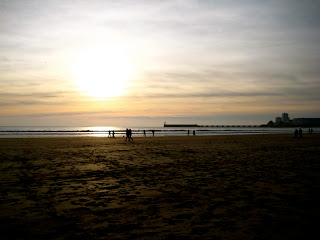 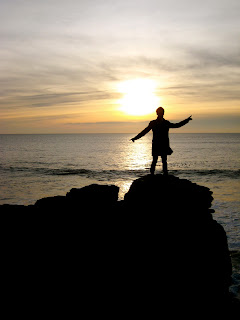 Fab at sunset, Les puits d'enfer, Vendée
Vendée is truly a gorgeous region, and the people who live there know it.  They are very proud of their land, and rightly so.  It is definitely a region to be considered for an eventual trip when touring around France or for a beach excursion.
Posted by EC at 6:03 AM