At the end of February, Paris got in touch with its agricultural side.  Despite the tough exterior and urban luxuries that the Parisian species prides itself for, the sight of a baby lamb or a big poofy chicken makes them go all soft.  Add a couple of really big expo halls chock full of food specialities from around France and the world, and you've got yourself a huge hoedown.  Only the Salon de l'Agriculture can bring people from all over the hectagone to revel in the greatness of France's terroir (and create an environment city folk don't mind the smell of cow and pig butts.)

I love the Salon.  This time 5 years ago, I was first told about it by my Business French professor at NYU.  She actually gave us the homework assignment to go, because this Salon has such an importance to French society.  My mind automatically went to the state fair in Tennessee, where you went to play games, eat funnel cakes and see tractors pull large stationary objects as quickly as possible.   When I arrived in front of the Porte de Versailles, I was pretty much dressed for a state fair : blue jeans, Tennessee sweatshirt, and sneakers (I didn't have class...et alors ?)  I get there and immediately realize that this is not your typical farming affair.  People were dressed incredibly well, and they brought their kids with their cute wardrobes to come play with the various animals present.  Then I discovered the food halls.  One dedicated completely to French food and drink, the other to international fare.  People came en masse with their friends to drink and eat in little restaurants that had been set up to serve choucroûte, crêpes, tartiflette, and other regional specialities.  Wine vendors were patiently watching visitors sip their various crus and then carefully sneaking in order sheets to persuade them to buy a case or two.  Everyone was asking questions about the production process, animals or plants used, spice combinations, timing.  So much more than funnel cakes and tractor pulls.  I was overwhelmed and impressed; it was love at first sight.

The French are incredibly attached to their produits de terroir despite the fact that more and more of them are turning away from agricultural activities as a means of living.  Cheeses, wines, sausages, breads, pâtés are all respected and where they come from is very important to the French.  A chicken from Challans or Bourg-en-Bresse is far more coveted than a chicken from anywhere else because those two places have the best standards for raising poultry.  Other regions are far more known for their cheeses, and sometimes this gets right down to the village. (For example, cheese from Roquefort, which bears its name, is aged in caves that have a certain mold that creates the cheese's tangy flavor and green mold.)  You go to specific regions for dry red wines, others for fruity red wines, and some for apple cider.  If you want to get in with the French, you should at least learn to name drop some or learn which wines go with what (aka Sauternes or Monbazillac goes with foie gras, and if it is marinated in that wine, you should drink the wine it was marinated in).  Fortunately, salons such as the Salon de l'Agriculture hand out many a prize for top products, making it easier for us foreigners to separate the good stuff from the embarassing at a dinner party. 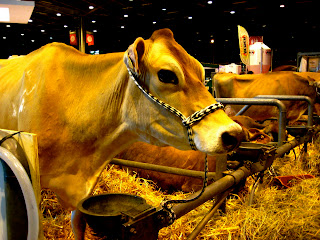 The Salon has a little bit for everyone.  For "foodies," there are the various food stands where you can test goods from local producers.  For kids, there are all kinds of interesting exhibits on horses, cows, pigs, sheep, cats, and dogs, as well as shows and other agricultural entertainment.  Danone usually has a fun stand that talks about yogurt manufacturing, and ends with free samples.  For engineers and scientific folk, there are generally exhibits about how agriculture is contributing to energy security and environmental preservation.  And for those hoping to become the next President of France, this event is a must, I would imagine since it shows that they are committed to French agriculture and its continued survival/respect within French culture.  Next year will be a great year for spotting all the big Presidential hopefuls as the attend the Salon!

I always go for the food halls.  They are overwhelming, and in a good way.  Picture if you will, two huge convention centers.  One will be filled with every major French food product known: wines from every region, sausages, cheeses from various areas, pastries, snails, and full service, sit down restaurants serving regional cuisine.  The other one will be filled with deliciousness from around the world : Switzerland, Italy, Brazil, China, Russia, Tartarstan (yup, you saw that right.  Tartarstan.), Spain, Sénégal, Morocco...the list goes on.  You can easily make a dinner/bar night out of this event (as I saw many a French person doing the Friday night I went).

If you are lucky enough to be in Paris for this event, please...I implore you...to take full advantage of this event.  Your senses will love you for it.