On the gorgeous summer day we got married, Fab's cousin wished us a life that was an eternal honeymoon.  And since that day, we've tried to make our life like that.  We travel when we can, exploring new sights, tastes, and wonders.  It was fitting, then, that our first anniversary be spent somewhere else in this amazing world other than our tiny Parisian apartment.  We escaped the incredibly cold, grey Parisian summer and headed to Greece.

First stop: Athens.  We arrived amid the excitement that was the Germany vs. Greece Euro Cup match.  Cheers filled the baggage claim area as Greece scored its first goal, and Greeks clamoured over to the closest television screen, abandoning their bags.  While Greece eventually lost, it was a perfect way to arrive in the city.  We were only in Athens for a day, during which we ran around and saw the Parthenon, the Acropolis Museum, and then rested in the shade of a café, drinking frappés.  Words cannot express how wonderful the sun felt on our pale Parisian skin.  We had dinner at a charming Cretian restaurant on a peaceful terrace (I'll go more into detail in another post).  The first terrace dinner of the year... 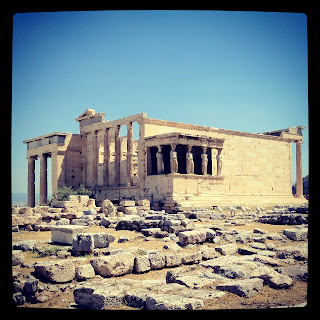 The next morning we woke up at an ungodly hour to board our ferry to Santorini.  The city was barely awake as we raced through the streets of Athens towards the quiet port.  Many of the large, high-speed boats were already there, waiting for the influx of passengers that would soon arrive.   Our boat was comfortable, with reclining seats, a little restaurant, and air conditioning.  Fab shook me awake as we arrived at Santorini, and oh the beauty!  All the brilliant shades of blue that one could imagine were there in that water.  The striking white buildings jutted out in contrast of the reds and browns of the cliffs.  We stumbled off the boat upon arrival at the port, and were greeted by individual home owners and small hotel proprietors, jutting their worn-out, faded signs in our faces.  Need a driver?  No problem.  Want to eat some cheap Greek food?  You got it.  Anything a tourist could desire to satisfy their immediate need was there at that port.

A driver met us to take us to our hotel in Imerovigli, a small town between Oia and Thira (the islands two biggest tourist cities).  The unassuming Afroessa Hotel welcomed us with open arms.  We walked in through the gate towards the most amasing view of the sea and caldera.  Both of our mouths literally gaped open.  We were given an upgrade and our room had its own private balcony.  A perfect unexpected gift for our first anniversary.  We immediately raced down the winding staircases and lounged the rest of the afternoon by the pool.  Our city slicker bodies needed the warmth and the rest. 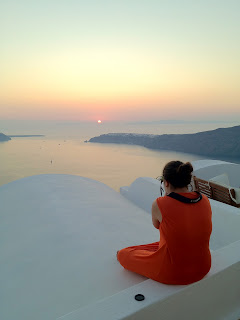 Armed with our little Smart car cabriolet, we were able to explore the island and move freely.  We pretty much avoided Thira, with the exception of a dinner with family and a boat trip.  Otherwise, it's too crowded to really be a relaxing spot.  We ventured down to the Agios Georgios beaches for an afternoon of beach bumming.  It's about a 30 minute drive from Imerovigli to this black-sanded beach.  Many of the restaurants and cafés have their own beach-front areas, so if you buy lunch, you can then use the beach chairs for free afterwards.  Otherwise, you can order items from the beach or just pay for the chairs. 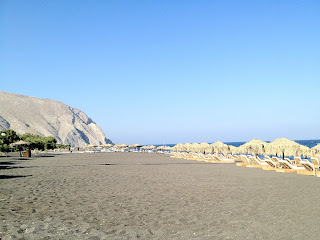 The guy who rented us our car, George, was quite the dynamic man, and he gave us an excellent restaurant recommendation for this beach.  Ta dichtia, or The Nets as everyone calls it, was fantastic.  The service was super friendly, the menu was full of great fish and seafood dishes, and the atmosphere was laid-back.  (I'll get more into the food specifics in a later post on restaurants).  The beach was a tad bit disappointing just because the black sand was rough and hot!  At least the water was frigid enough to cool you off.

We finished our first anniversary evening off with a sunsent trip to Oia.  When you see pictures of the blue-capped churches and white buildings overlooking the sea, that's Oia.  The photographic representative of this island paradise.  We dined at a rooftop restaurant, lit with candles and moonlight.  Then we sauntered off around the quiet midnight streets, hand in hand, remembering our perfect wedding day.  It was the perfect moment to say the vows we never got to say (In France, you just state with a big resounding OUI that you'll uphold the republican obligations of husband and wife.  No mushiness involved really...) 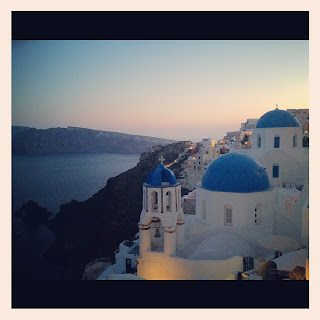 The Santorini sunsets are as amazing as everyone claims. Stunning.  Colorful.  Romantic.  I don't think you could ever get tired of watching the big orange globe descend behind other distant islands.

Santorini definitely set the bar high for our Greek Islands vacation.  Amorgos was our next stop; site of the famous film Le Grand Bleu.  Would it be able to keep up with lovely Santorini?  Find out in the next post...