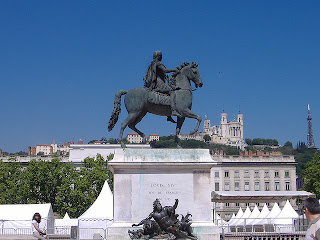 Before Paris won my heart with its perpetual beauty, Lyon seduced me with its warmth, its conviviality, and its gastronomy.  In 2000, I came to France for the first time and lived not too far away from this under-rated city.  I was able to come visit thanks to one of my step-father's former post-doc students, who kindly invited me to stay with her.  I'll never forget the night when we went to a sort of bouchon lyonnais with her friends.  I didn't quite follow all of the conversation that night, as I was still very novice when it came to the French language, but the food.  The food.  It remains one of my happiest memories of France.  I had quenelles for the first time, and it was at that moment where French cuisine really touched me.  The creaminess of the nantua sauce, the tender rice, the quenelle melting on my palette.  I dreamed of quenelles long after my plane had touched down in the United States.  I couldn't describe it well enough to my friends at school upon my return.  They just had to be there.  Live that moment of gastronomical delight.

And don't even get me started on the pognes.  Everytime I go back to Lyon, I have to go to the old city and buy the luscious brioches covered in red sugar and hazelnuts.  They are truly amazing.

When I heard that Alain Ducasse, the legendary French chef with a penchant for Lyonnais cuisine, had a moderately priced (compared to his other restaurants...) bistrot lyonnais in Paris, I knew I had to go.  It would be my Proustian delight in the middle of the cold, rainy Parisian winter days.  We stepped inside the restaurant to discover a early 1900s bistrot décor, full of marble, old advertisements, and chalk boards describing specials.  It could have been Ernest Hemingway's local haunt.

We started off with coddled eggs with truffles and mushrooms.  We were given these amazing garlic breadsticks to sop up the egg yolks, and somehow they managed to make them crusty on the outside but softer on the inside.  I was a little sad that they only gave us two.  We then moved on to the quenelles.  Fab had never had a quenelle outside of a cafeteria setting, and this just...blew my mind.  How can you be French and not have had this culinary masterpiece?  They were light, airy clouds upon a savoury river of Nantua sauce.  Prawn tails decorated the sauce to demonstrate what had been used as the flavour element.

The pièce de résistance if I may say so, was dessert.  This isn't just because I have a weakness for all things sweet.  They really were a masterpiece.  I took an île flottante, expecting the mundane meringue floating on less than flavourful crème anglaise.  That was my first mistake...this is Ducasse afterall!  The man somehow made a meringue with tiny little pieces of the red pralines, giving it a nice but not too overwhelming crunch.  It came accompanied by a small slice of tarte aux pralines.  Such a sweet ending to a magnificent meal.


I have a list of restaurants where I always take out of town guests, and this one will definitely make the top choices.  The food was delicious and simply presented, allowing for a great gastronomical experience without the stuffy feeling.  Yet, I think the meal's success can be attributed in part to my already fond attachment to Lyon and its amazing bouchons.  The rest of the menu remained a bit rustic and outside of what might consider to be traditional French cuisine.  Nonetheless, I highly recommend this restaurant, especially if you cannot make it to Lyon during your trip to France.